#121 by mario_lima
I don't have any inside information and I don't think you have a little pea brain, I was just stating the obvious. If the goal is to show fraud you have to prove it. If there was video or pictures we all knew by now.

If this story is true we'll see that in court, and I will be the 1st in line to apologize, but it's not Robb Hurst the accountant making allegations on Twitter that makes it true.

Mrtools, you and many others here are making wonderful things to a lot of people including me, and I have the most respect and highly appreciation of you.

#123 by Ogee
I don't know too much about US law but this looks like it might be important. 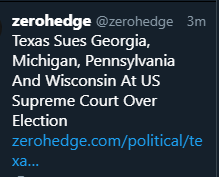 @RoscoeBDavis1
5h
The end around case has been put together by TX AG Ken Paxton suing GA, MI, WI, and PA at SCOTUS. Bringing this case across multiple jurisdictions gives it a straight lane to the SCOTUS.

This happened just before midnight tonight, will post documents soon


5h
Texas approached the Supreme Court directly because Article III provides that it is the court of first impression on subjects where it has original jurisdiction, such as disputes between two or more states, this is hard tactics


5h
The Great State of Texas argues that these states violated the Electors Clause of the Constitution because they made changes to voting rules and procedures through the courts or through executive actions, but not through the state legislatures.


5h
These non-legislative changes to the Defendant States’ election laws facilitated the casting and counting of ballots in violation of state law, which, in turn, violated the Electors Clause of Article II, Section 1, Clause 2 of the U.S. Constitution.


5h
Additionally, Texas argues that there were differences in voting rules and procedures in different counties within the states, violating the Constitution's Equal Protection Clause. Bush v. Gore 2000


5h
Finally, Texas argues that there were "voting irregularities" in these states as a result of these changes.


5h
Texas is asking the Supreme Court to order the states to allow their legislatures to appoint their electors. If this is successful it opens the door for the next step.


The genius behind this is they don't have to prove fraud, there's no doubt there are "election irregularities" all that has to be proven is that they changed election laws by executive order and not by legislation as required by the US Constitution. Article II, Section 1 Clause 2

4h
All these Governors and Sec of States making these changes out in the open make the case pretty clear.

The Defense is going to claim it was a COVID Pandemic, mark my words, it's all they got, it was their excuse for everything in every state.


4h
Article II, Section 1, Clause 2 is really clear and there is no Pandemic clause.

Now when they start screaming Pandemic Crisis, all thee libs that went out for haircuts and Napa Valley Dinners, and seen all over the media, claiming privilege, are screwed


4h
If you can go to the store, go out to eat, go get your hair done, do all the things the political elite were doing, while claiming lockdown and mask mandates, then you can get out and vote, no need for special circumstances!


4h
The relief being sought has not only precedent (Election of 1836) it has constitutional verbage to back it up.

Not asking for the SCOTUS to throw out ballots, just follow the Constitution and the 12th Amendment of a Contingent Election.

"By these unlawful acts, the Defendant States have not only tainted the integrity of their own citizens' vote, but their actions have also debased the votes of citizens in Plaintiff State and other States that remained loyal to the Constitution"


2h
This a very narrow lawsuit that gets straight to the heart of the matter.

Questions are can a state executive ignore legislation when setting election rules?

According to the very specific wording of the US Constitution, no they cannot, there's zero room for ambiguity on that.

The only state in this suit that have bound electors is GA, however there is wiggle room legally.


2h
The way you get around the bound elector in GA is show that they violated their own Constitution, as the US Constitution.


2h
This tactic is an express lane to the SCOTUS that have questions that are being asked elsewhere in other suits, but are best answered by SCOTUS. It cuts out the time consuming process to get to the SCOTUS thru the lower courts.

#126 by mario_lima
Ogee, most of the 50 States recently changed the law about mail in voting including Texas, yes Texas. To say that's unconstitutional it's shooting in the dark.

#129 by ChuChu Rocket
41 days to go until creepy uncle Joe's inauguration. What's Trump doing? Is he throwing in the towel? Haven't seen much progress!

#130 by mario_lima
It's not the Country that needs a victory, it's Trump.
The people have spoken in this election.

Re: TMA - Triangular Moving A…
Hi Darks, could you please add "Automatic next higher TF" to TF menu. Thanks! He can not. He does not have th
RplusT, Fri Jan 22, 2021 7:48 pm
Re: MT4 Indicator requests an…
Hi Mrtools, This Glitch Index indicator works okay for currencies but gives opposite signals for indices and gold. For
traderokey, Fri Jan 22, 2021 7:32 pm