#1 by logicgate
Just wanted to post here my experience as a customer, so other people can be more careful when dealing with course vendors. I should have known better because I am not a noob with this stuff. If you don´t believe me I can gladly post here proof of purchase (paypal receipt).

Months ago I bought two courses at Feibel trading: Climactic Behavior and Feather´s Weight. Very Very expensive courses for what they are (349 GBP each = US$450!!!! for a couple of videos), but they were being marketed as "exclusive strategies" so I thought to check it out, I like to see other people using the same method I use for trading to check out for some nuance that can improve my trading.

Climactic Behavior was the worst money grab. The "course" is a copy of Gavin Holmes (tradeguider) explanation of climactic bars, which is free by the way (lots of free seminars on youtube, same concept is found for free on the book "Master the Markets" by Tom Williams, and Gavin book "Trading In The Shadow Of Smart Money"). You guys familiar with VSA know Gavin´s "trigger numbers" approach, he extends lines from the high, low and close of climactic bars and then check for reactions at those levels (upthrusts, springs, no supply, no demand at those levels to initiate a trade). That is exactly what the climactic behavior "course" is, a carbon copy. When I finished watching this one I was already very pissed off for burning US$450.

Then the Feather´s Weight course is nothing more than a low volume pullback trade at structure (even though he will say it isn´t), very bread and butter VSA trade that any decent VSA trader will have in his book (concept also available in master the markets book, trading in the shadow of smart money book, tradeguider youtube seminars, Dr. Gary Dayton webinars), he just added some filters which in fact make you miss good trades. So you can imagine how stupid I was feeling for burning 700 pounds (US$903 !!!) in both "courses", which are marketed as "exclusive strategies", a big lie. It is free knowledge in an expensive product packaging. You know those guys who read other people´s books and watch their courses, then copy the stuff to create "their" courses? It is what Feibel did, he just gave a different name to it, but it is the same thing - common course vendor practice to fool you.

I ended up feeling scammed, because I had made crystal clear for him before purchasing the material (screenshot attached) that I Wasn´t a noob, wasn´t looking for basic stuff, that I was a VSA specialist (he was trying to push his other courses on me ). So he knew my level of expertise, but decided to remain quiet to make a quick buck: that is how the course sellers make money, selling courses, not with trading. He should have said: "look, you gonna waste your money, at your level you won´t learn anything from those videos".

The last straw was a couple of days ago, it is what made me come here instead of seating here quiet, "swallowing" all this without a complaint. Let me explain: 5 months ago, after the purchase, I received an email from Feibel trading saying that he was putting together youtube videos showing examples of this "Feather´s Weight" trade, which obviously were extra complementary material for the course. Ok, I never received those youtube links, then 10 days ago I remembered it, then sent an email asking for the links, no reply (that is how Feibel behaves, they just ignore you until you have sent a couple of emails of pressure). Today I got a reply saying that the videos are restricted, that only contributors can access the videos (so he invented a new rule now for you to access the extra material from the course). So not only I gave him US$900, but If I Wanna watch complementary examples I have to produce free material for him. That is the pinnacle of absurd and slap in the face.

So I don´t think I will be doing business again with them, the courses seems to be a blatant copy of tradeguider, Dr. Gary Dayton and David Weis material combined with pharmacy price tag, in a shiny package. I can see in his site now that he even copied Dr. Gary´s Deep Practice sessions (he calls Effective Habitual Practice), I mean it is a carbon copy, but he will say he was "influenced" by them lol. I don´t know how Dr. Gary Dayton haven´t sued him yet for this.


Always be careful with course vendors guys, the safest way to get a course is by putting together a group and doing GB, this way the damage to your pocket will be small, given the high probability of being scammed by them.


And look how crazy this guy is, he impersonates different people in his emails, he pretends to be customer service, then CEO, he is also the teacher, etc... It is a one man company trying to pass the image of a big firm with lots of employees. 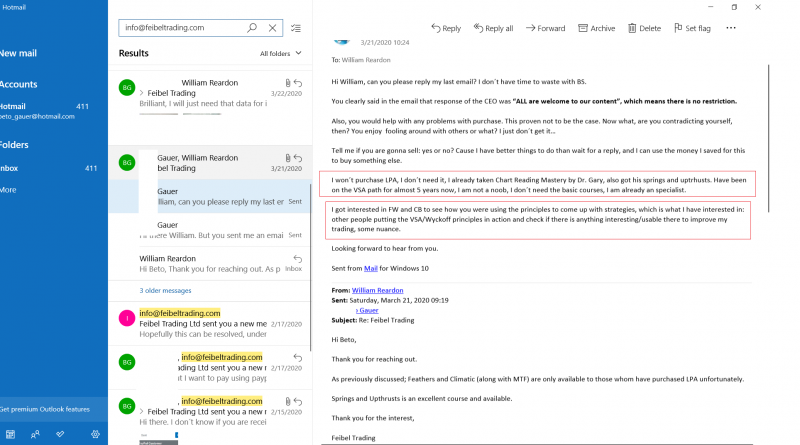 Thanks for the warning and sharing your experience. Sorry to hear of this treatment. It's always a shame to hear stories like this. At least people who are searching about Feibel Trading on Google will see your post and hopefully avoid them!

#3 by logicgate
I just hope people google before they think about wasting their money with this guy. Lots of times we do the opposite: we put ourselves in a situation of risk, then only afterwards we assess that risk.
mlawson71
mlawson71
Senior Member

#5 by mlawson71
Has there been any development with this scam?

#6 by FOREX_LIFE
Thanks for the warning!
This information is saviour for many new traders

Re: Trading Pullbacks System
hello sal what was that bottom indicator (ossilator one) i think i saw it from tradingview. nice setup 👍 nice value
sal, Wed Apr 14, 2021 1:21 pm