DIVERGENCE (One of the nearly Holy Grail Trading System!!!)

mades wrote: ↑
Fri Aug 18, 2017 6:33 pm
Divergence is miles from holy grail, especially because it lags even more than normal indicators. Also it is extremely unreliable if not used on very high TF (4H min).

Observational approach is when you make something up like "3 long wicks" which we could call TA fallacy. Or fancier word "Apophenia" (look it up). Trading should be about rules and system rather than about subjective conclusions or beliefs, any system can make money if its tuned and followed properly.

The basic questions are the most important ones and scalper needs to think in advance because price can change any minute. You can't observe 10+ pairs at once when timing of your entry is crucial.

It absolutely doesn't matter who you are trading against (and you don't know it either, can be broker, other traders or other institutions). Those who move the charts trade against those who can fill their orders. The question you asked is meaningless with made-up expressions.

I don't want to hijack this subthread. It is also pointless and should be moved somewhere else if mods allow. You can have the last word, but I won't react anymore because your replies sound aggressive and supercilious.

Usually I'm a nice guy, but when someone try to spread nonsense, who would I be not trying to say that this someone tells obviously nonsense. I mean here also read absolute beginners and traders who don't know divergences or how to handle it and they could believe it.

Mades, read again your first post here and your supposed last post. Sorry, but what should I call this? I had to facepalm all the time reading this. And why you are still here in this thread and bother around? You don't like divergences - ok, we know now. Others use it as leading indicator or confirmation and for those is this thread. Also I use them very often and would like to discuss it, but you came here and request to close the thread? I guess, you are the arrogant one here. I just say that you are a beginner and this is obvious to everyone who is advanced or higher-leveled. It's ok and I can understand that you don't want to hear that but it is the truth and neither life nor Forex is a pony farm. I attack you? You mash up and confound so many things, and in addition you call the way professionals work and the way they make their big money day by day "TA fallacy". Also this is arrogant from you, don't you think? But you can't know better when you don't listen. Trade what you call a 'system' and let others discuss their stuff. Thanks

#22 by mades
Mntiwana you see? There is just no room for normal discussion.

But for the sake of argument, let's stay focused on the issue and try one of his "recommended options" RSI(5) on his trading timeframe (5M) chart and see what happens. I will add also RSI(8) and RSI value I would choose (21). GBPUSD sounds like a good pair (his own recommendation again) for divergences with its many peaks during the day and "smoother waves".

As you can notice, there is no "lag". I also identified and drew some major divergences during the London and NY session according to this basic rule:

If we were to follow this rule, the lowest RSI value (5) would fail twice while RSI(8) would make it but on two occasions wouldn't connect properly (line crossed peaks on indi). RSI(21) would do it right all 3 times. We can obviously skip the rule, but then the discretionary part of trading kicks in and that is something that can't be taught.

In case someone would say "it was during sideways market with no volatility", the area on the picture has range of 86 pips and ADR(30) on GBPUSD is 89. So slightly below average volatility.

I'm not going to draw any conclusions other than the fact that I acknowledge the usability of divergences now more than when we started this but I still find them laggy for my risk appetite (I prefer tight SL trades). I'm also retracting my words that they are unreliable below 4H, they can be used up to 5M if scalper is willing to widen his stoploss (or trade without confirmation). 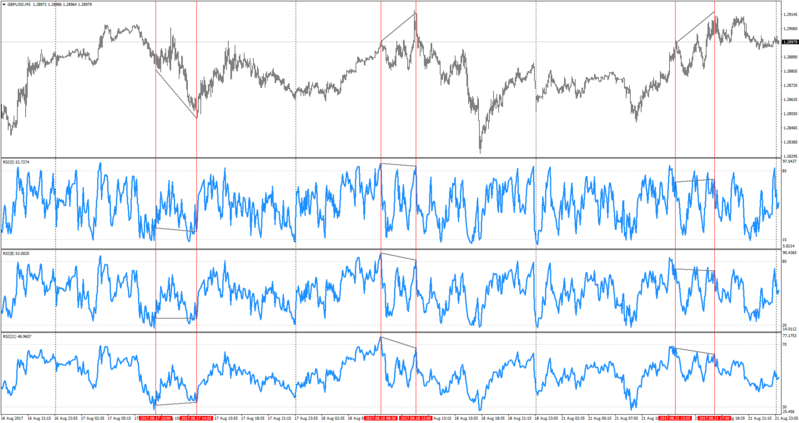 #23 by Krelian99
Here I have a chart from Friday (you can take any day, tf or pair) like you could trade bottoms and tops like an advanced trader. Therefore you need some knowledge of simple TLs and Double Top/Bottom, who is coming in and going out and a feeling of trend exhaustion (upthrust gets lesser and incoming laggards fail to push back market in trend direction over time - the big pseudo-outbreak candles after bigger or longer retracements).

When we take a look on the momentum indicators, we can't say one is better or worse. They are similar but complement each other, so the search for the best divergence indicator isn't very profitable in my eyes. Better you learn to use your tools purposeful. Do not set high periods for your divergence indicators. Why? We can compare the behavior of traders at given points. I don't care whether an oscillator is in an OB/OS zone or none-trade-zone (I mean what should this be?), just use the divergences. At the beginning of a trend the momentum is very often higher, more and more trendies realize that the old trend is over and switch into the new direction. At the end of a trend, more and more traders go out having reached their goals or loosing their trust in the trend, so the momentum go back but some laggards (often already in a loosing position) don't accept that the fight is already lost and try a last big outbreak but they don't get support anymore and also momentum don't react much anymore.

As I or many others repeat over and over again, one indicator is useless, but a bunch of approaches with synergy will change it in your favor. When more and more signs of weakness/strength appear at the same point or at a strong S/R zone the possibility that the market will turn not only for a retracement are very likely. An emerging divergence against the trend (unconfirmed divergence) and the lack of other signs for retracement/reversal is a sign that the market stops shortly but there will be an impulse further in trend direction because traders have confidence in the trend what is a good sign for a healthy trend.

Have fun and don't forget that trading is an art, not science.

”Failure is success in progress”

This Stochastic Divergence indicator has proven to be a much better choice and I have used it to make lots of successful (live) intraday trades. I also find it to be one of the more reliable ones out there.

How to: Draw Fibonacci Extensions the easy way
How to: Identify major Support & Resistance using the line chart

#26 by yuhu
Hi Jimmy, thank you for sharing! but i think this version repaints right? Have you come across a non repainting one or is this something like zigzag that is always repainting?

yuhu wrote: ↑
Thu Sep 07, 2017 5:26 am
Hi Jimmy, thank you for sharing! but i think this version repaints right? Have you come across a non repainting one or is this something like zigzag that is always repainting?

No repainting
But as it was told many times : divergence can be caught only after the fact
yuhu
yuhu
Junior Member

#28 by yuhu
Hi Mladen, many thanks for the quick reply

I have set it up to send email alert to me for testing purposes.

#29 by heispark
Joe Dinapoli said about divergence: "Don't use an Oscillator to price divergence as an entry technique, unless you have an excellent means of filtering it. Even for the best of Oscillators this can, and often does, spell disaster, particularly for the new participant. Price and Oscillator divergences abound, and the market continues to stop out the divergence players. Looking back in time, you're sure to find divergences that work, but when you're going forward in time, as in real trading, the accuracy of this technique just isn't there."
Simplicity is the ultimate sophistication - Leonardo da Vinci

yuhu wrote: ↑
Thu Sep 07, 2017 5:26 am
Hi Jimmy, thank you for sharing! but i think this version repaints right? Have you come across a non repainting one or is this something like zigzag that is always repainting?

No repainting
But as it was told many times : divergence can be caught only after the fact


Exactly. IMO divergence is no holy grail at all. PA trumps whatever any oscillator is doing.

There's plenty of occurrences where divergences fail. However I'll place pending orders in case it PA does follow thru, but rarely take a fill based on visual divergence alone.