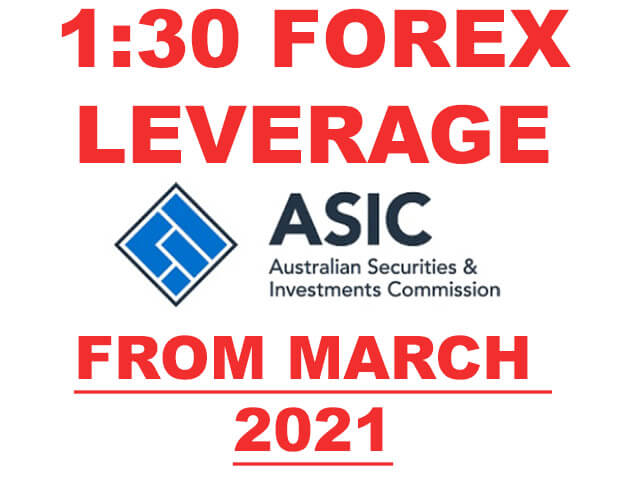 The Australian financial regulator, the Australian Securities and Investments Commission (ASIC), announced a set of new regulatory rules that apppear to have been heavily modelled after the regulation introduced by ESMA in the European Union last year.
Those rules involve reducing CFD leverage, protection against negative balances, standardised CFDs brokers margin close-out, banning bonuses and other incentives as well as the likely banning of binary options.
The reason for this step is a research among the clients of 13 different brokers. Those clients traded in CFDs and lost over $774 million only between March and April 2020.
According to the ASIC Commissioner Cathie Armour, the reason bind those mind-boggling losses is the high leverage and the continuing market volatility caused by the pandemic. In the light of these circumstances ASIC capped leverage at different levels for different assets:

Haha shit, quite a few traders (especially newbies) will be pretty upset about the 1:30 leverage, that's for sure.

Thanks for the update on this man.
Trade with the broker that supports our work! FBS are offering $140 to get you started! Click, here to begin live trading, today.
No commissions are earned by Forex-station.

#3 by mlawson71
You're welcome.
Yeah, I imagine they would be. It didn't go all that well in the EU when it got introduced.

#5 by In2Blues
Yeah, that sucks but I understand why they would do it. Some newbies don't use proper risk management and will lose all their money then whine about brokers scamming them and how Forex is a scam blah blah blah.

But it will make it harder for those of us with very little money.
Terry

#7 by Nbats7979
Maybe some of the brokers will find a way around this by moving accounts to an "offshore branch"...

ohhh how would it work tho?? if ozzies wanna trade cfd............. like pepperstone will they have 2 move the business to cyprus or somethign or just move servers 2 overseas??

#9 by Nbats7979
I have a feeling one of the brokers I use is migrating clients to its Singapore asia pacific desk. I'm not up on the regulation framework enough to know whether they will be able to offer higher leverage to clients based in Oz/NZ... I guess they think they can, otherwise why go to the trouble.

#10 by Ogee
A quick revision of what the changes actually meant when introduced to the UK by ESMA at start of 2018.

Obviously a 10 fold reduction in leverage (1:200 down to 1:20) equals a tenfold increase in the margin requirement, the amount needed to be held in your account to open a position and keep it open. Fairly straight forward for FX but a big change for Indices, previously £100 was enough to open a minimal position size trade in Dow but now you need £1000 in your account to cover the trade.

As the asset price is a function of the margin requirement many traders with small accounts switched to lesser priced indices such as FTSE, CAC and MIB (Dow 28,000 vs FTSE 6,000).

(examples are using out of date asset prices)


On the plus side is the negative account protection so no longer at risk, as mentioned above, of a black swan event such as the SNB removing the dollar peg causing a 2000 pip move and hundreds of pips in slippage which left many owing the broker 10s of thousands.

Not sure if ASIC have included the ESMA requirement for brokers to disclose the % of their retail clients who lose money?

The aim of the new regulations was to protect retail traders but after 2 years there has been minimal reduction in the % of retail traders actually losing according to broker records. Was averaging around 80%, now around 75%. The suggestion is that retail traders now just lose more slowly (smaller bets).

Re: Bitcoin is going down lik…
Others who are pretending to be traders are doing just that and spending their day making memes (again) :lmao: lmfa
moey_dw, Tue Jun 22, 2021 8:13 pm