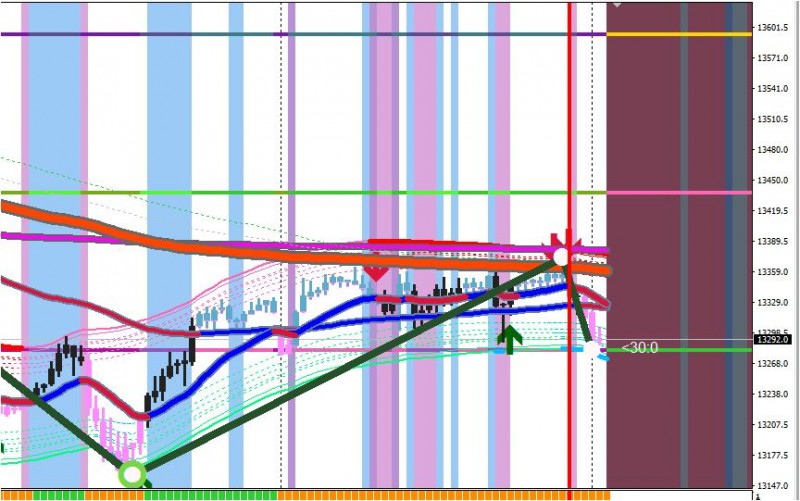 Direction Identified on 30 min - Now we can trade smaller time frames in the same direction.

PS Before anyone asks, yes I have changed the template, make it easier on the eye.


sorry xard but at this point we were buy from me 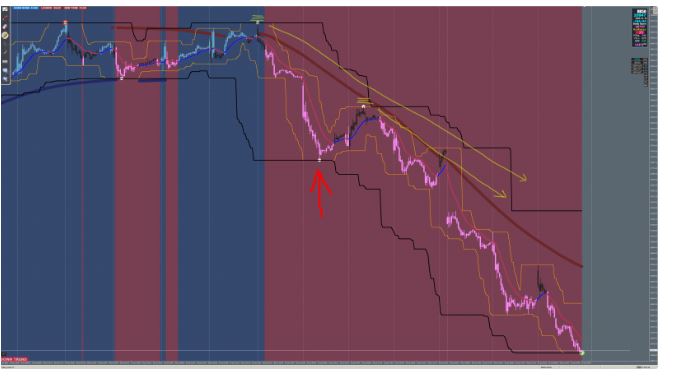 Direction Identified on 30 min - Now we can trade smaller time frames in the same direction.

PS Before anyone asks, yes I have changed the template, make it easier on the eye.

nice setup, thank you very much.
With your precise explanations, we can leave with a good basis and understand the strategy to take.
I participate with pleasure the strategy of the 2nd white point during the month of February and March.
On which unit of time is the best to go back in business.
I see that with M30 would be safer for a purchase or a sale.

Thank you, God bless you

#1204 by xard777
Here is a 1 min chart (HK50) showing the BIAS Red Semafor Top followed by our two white Dots. We are interested in the 2nd White Dot where Price should stall and a reverse should take place giving us our continuation of the DOWN move off the Top Semafor.

If we look at Fibonacci Retracement from the Top Semafor to the 1st White Dot we see that PRICE retraces back over the 61.8% and stays below the 78.6 level, this is a perfect Gartley 222 and price should move on DOWN from here.

Someone posted mladen's smoothed average indy in an earlier post so I thought I would see how it looks on the setup.... Nice!
Xard777 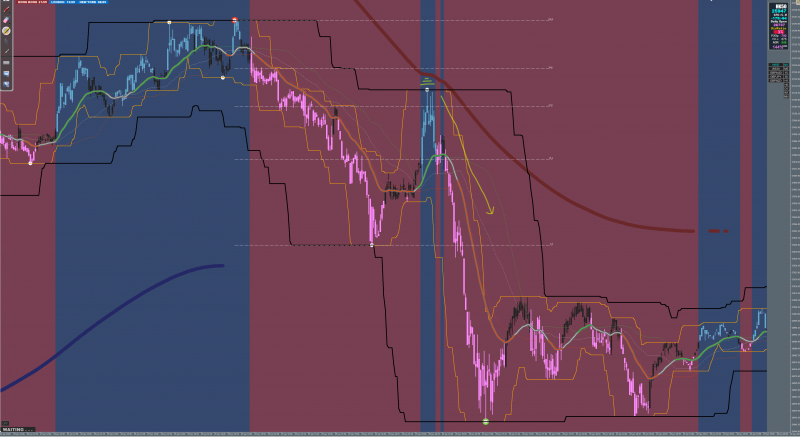 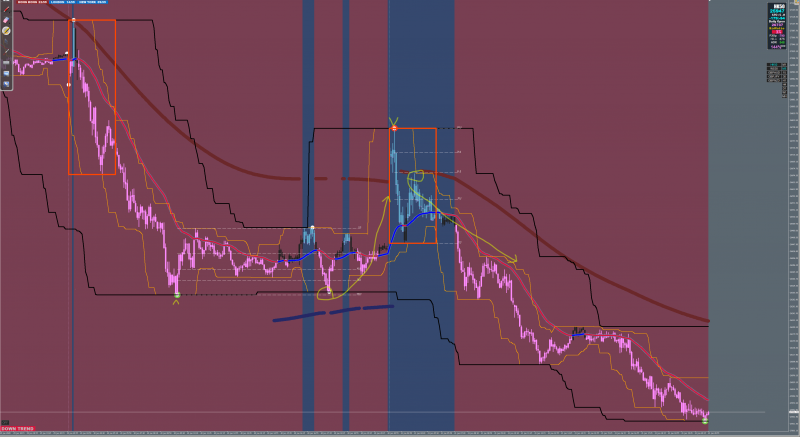 Do you have the latest BGDzones ( without waiting grey zone) indicator?

Thanks for ur time... 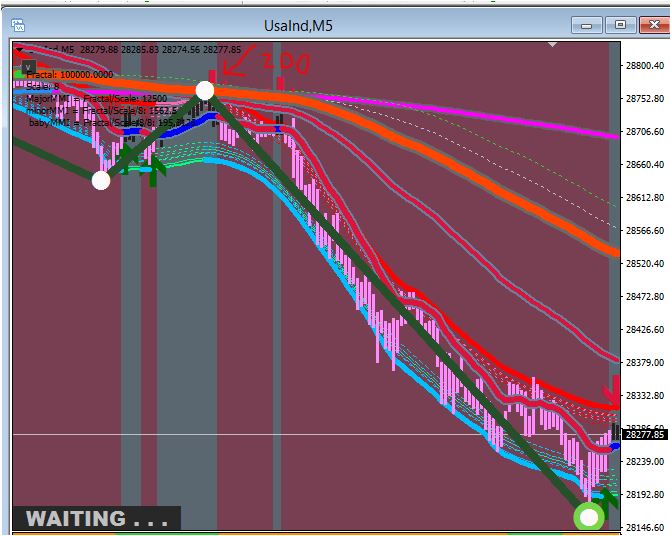 I know a lot of people like to trade the 4hrs charts but that tends to involve carry trades that I try to stay away from as sooner or later you end up getting caught in some kind of backlash that will be devastating for your account.

Most traders will opt for 1hr trading and very few will look at 1min but I would like to point out that if you make 100 pips on one trade then you have some leeway with your next trade and so on. If we can identify when the market moves then we can close in on potential trades with a high success rate.

Take a look at today's trades during the first couple of hours of the Dow opening bell - marked with an orange box - there was in excess of +500 Pip$ in trades after price had crossed the trend line on the 1min. OK, I am not saying that you will go out and make all these trades each and every day, but the potential to gleam a couple of hundred Pip$ during the first couple of hours of the opening bell is possible. The plus side is that you are in and out of your positions inside two hours - no risk of a carry trade which means you get to sleep like a baby, rested and ready for the next day's trading.

All the best
Xard

You shouldn’t apologize for anything, for living your own life especially after your generous offerings.
Trading strategy: your advice (in bold characters) is the one strategy I settled on: trading pullbacks (countertrend breaks) in trends. According to my investigation this is one of the most (maybe the most) consistent strategy!
I think most of the questioners can settle now (if they can comprehend that the Holy Grail is something like this). And your set-up can be a good tool to identify these spots, when a temporary counter move switches back into the direction of the main trend move.
Timeframe: You are totally spot on many of us would prefer higher timeframes – not because they are better (maybe easier to manage), but they require less time commitment as we also have other pressing activities (maybe later, if trading could totally make up for regular jobs the preference can change rapidly).
But if I understand your remarks well: the 20200130-package can be used on also H1 (or H4), can’t it? Are there any modifications to be made to have a proper set-up for H1?
Exit- leaving too much on the table: maybe you should focus on partial close where you generally close, and let the other half with trailing stop.
Challenge: I try to participate in testing the recent set-up with the ‘2nd white dot’-strategy you announced, though I will be quite busy right from the beginning of February till mid March, that’s why it might be easier for me to use higher timeframe like H1.
MMath-lines: sorry if I'm persistent, but unfortunately they are good for indices, and gold, but labels are still missing for currencies...
(HK50: Hong Kong market opens at 2:30AM for me, sorry, if I settle on others like DAX

XARD: Yes, the strategy will work fine on H1 however, there will be times when you end up with a carry trade on the 1hr and to be honest I would prefer to be in control of my trading at ALL times and not leave it to chance. Plus, it is much easier and quicker to pick up the 2nd White Dot on the 5 min TF (usually several times during the trading session) and win big on Pip$ that pay out better than your local ATM. By nature we tend to take our profits way too early and watch in awe as the market shows off and continues to carry on without a care in the world (and without us) to new levels. How many times have we been a spectator only to see it run 500, 600, 700 Pip$ without us :-(

I know that Gann and Murrey both used the strategy where they would sell half their position at profit and let the remaining half run.

Well, we can now play it at it's own game by trading off the 2nd White Dot and staying in the trade all the way till it hits the black channel line (Payback is a bitch).

I know a lot of traders prefer to trade within their own timezone but if you make the effort to trade HK you will more than amply be rewarded.
The biggest payouts are from HK open till 10 am London time and yes there are other rewards in the DOW market as well - it is just a big lottery payout that retail traders never ever had before.
All the best
Xard777
jgxpro
jgxpro
Junior Member

#1209 by jgxpro
To help the beginners (and maybe Xard, so he doesn't have to face so much questions

) closing their knowledge gap, and form a more solid base I recommend you a free course teaching from the basics till you can totally get Xard's strategy of trading pullbacks. The author is Adam Grimes, who wrote The Art and Science of Technical Analysis: Market Structure, Price Action, and Trading Strategies. I have seen much weaker, scam courses sold for hundreds of $, so I think it fits Xard's generosity. You only have to register:

PS: I hope it's OK to recommend a free course, if not pls delete.
markjoe
markjoe
New Member

hello ! thank you for sharing this, well may you please share the arrow indicator you used in this TPL . thank you in advance

Re: Something interesting ple…
Hi, the download is also allowed for non-registered users, but they cannot thank you.
pacois, Sat Apr 24, 2021 12:09 am