#1 by mrtools
Ichimoku Indicators for Metatrader 4 It was developed in the late 1930s by Goichi Hosoda (細田悟一, Hosoda Goichi), a Japanese journalist who used to be known as Ichimoku Sanjin (一目山人, Ichimoku Sanjin), which can be translated as "what a man in the mountain sees".[citation needed] He spent 30 years perfecting the technique before releasing his findings to the general public in the late 1960s.

Ichimoku Kinko Hyo translates to one glance equilibrium chart or instant look at the balance chart and is sometimes referred to as "one glance cloud chart" based on the unique "clouds" that feature in Ichimoku charting.

Ichimoku is a moving average-based trend identification system and because it contains more data points than standard candlestick charts, it provides a clearer picture of potential price action. The main difference between how moving averages are plotted in Ichimoku as opposed to other methods is that Ichimoku's lines are constructed using the 50% point of the highs and lows as opposed to the candle's closing price. Ichimoku takes into consideration the factor of time as an additional element along with the price action, similar to William Delbert Gann's trading ideas.

In the Western world, it is solely known for its “Graphic Environment”, due to the fact that authors have not translated the original manual into English, German, nor Spanish. However, Ichimoku is also integrated by three other theories that improve and enhance the indicator:

It is primarily used as a signal line and a minor support/resistance line. Tenkan Sen (red line): This is also known as the turning line and is derived by averaging the highest high and the lowest low for the past nine periods. The Tenkan Sen is an indicator of the market trend. If the red line is moving up or down, it indicates that the market is trending. If it moves horizontally, it signals that the market is ranging.

Also called leading span 1, this line forms one edge of the kumo or cloud.

Senkou span B calculation: (highest high + lowest low)/2 calculated over the past 52 time periods and plotted 26 periods ahead.

Also called leading span 2, this line forms the other edge of the Kumo.

Kumo (雲, cloud) is the space between Senkou span A and B. The cloud edges identify current and potential future support and resistance points.

The Kumo cloud changes in shape and height based on price changes. This height represents volatility as larger price movements form thicker clouds, which creates stronger support and resistance. As thinner clouds offer only weak support and resistance, prices can and tend to break through such thin clouds.

In addition to thickness, the strength of the cloud can also be ascertained by its angle; upwards for bullish and downwards for bearish. Any clouds behind price are also known as Kumo Shadows.

Also called the lagging span it is used as a support/resistance aid.

#4 by Dragon
Stock index of the cloud with the time frame. 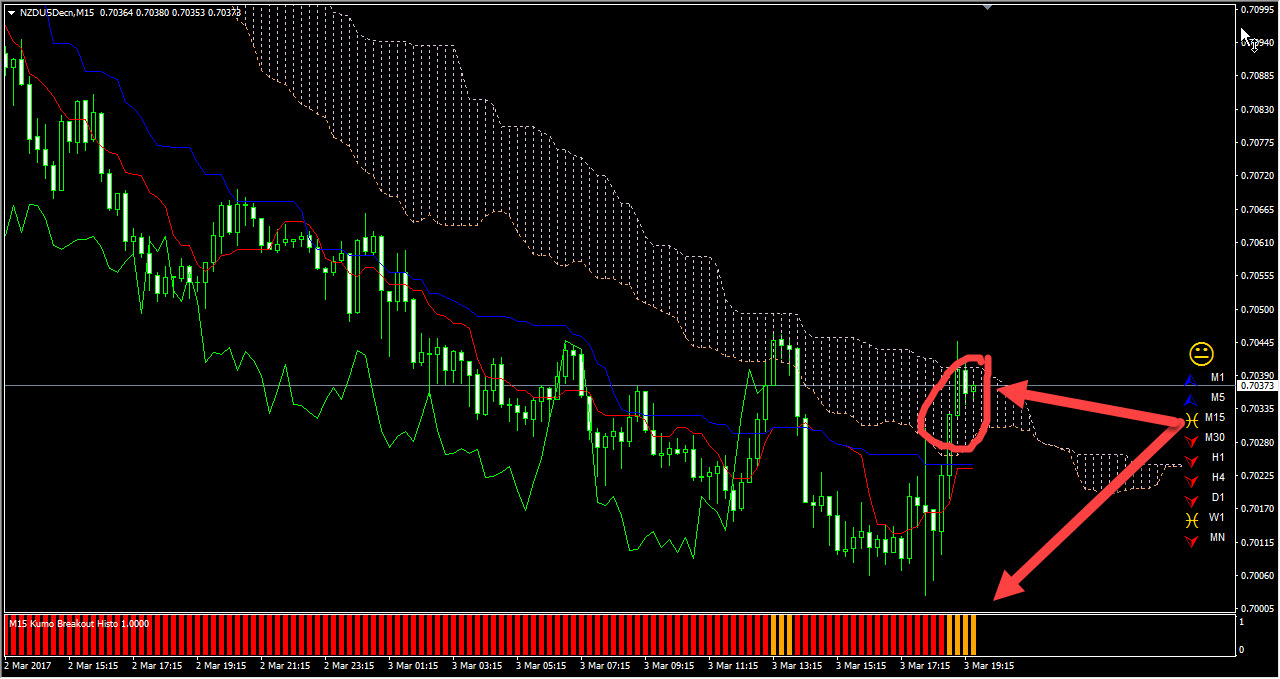 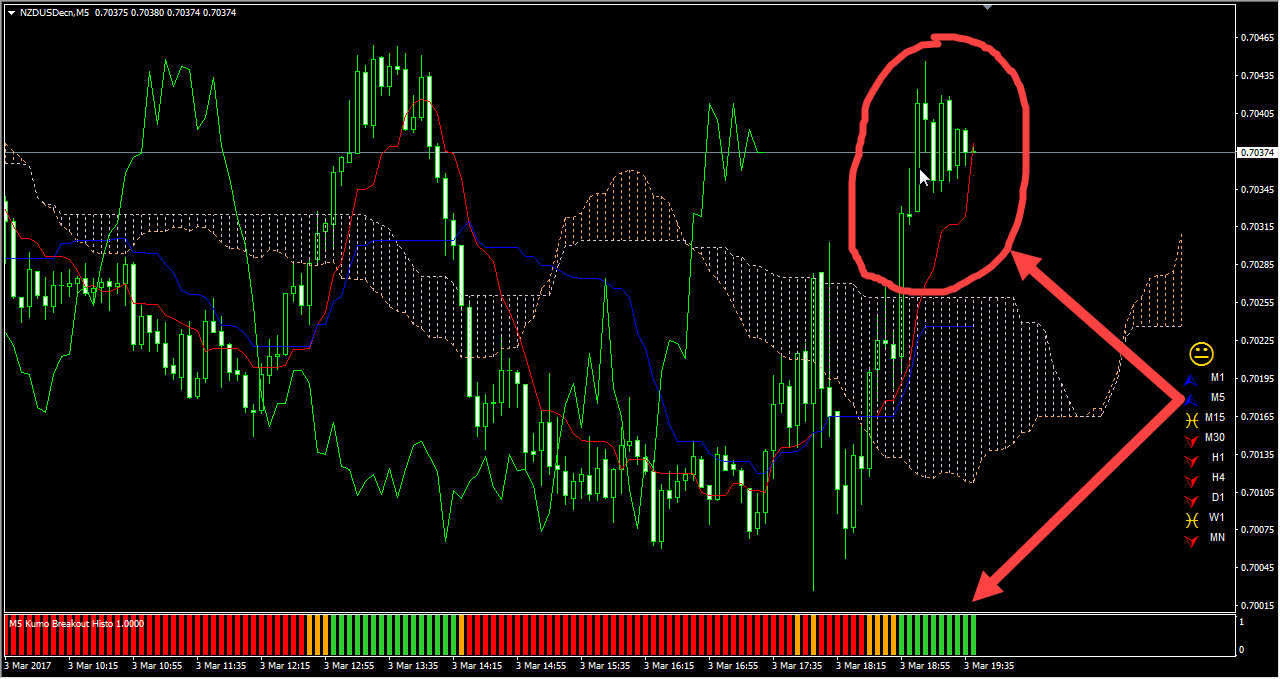 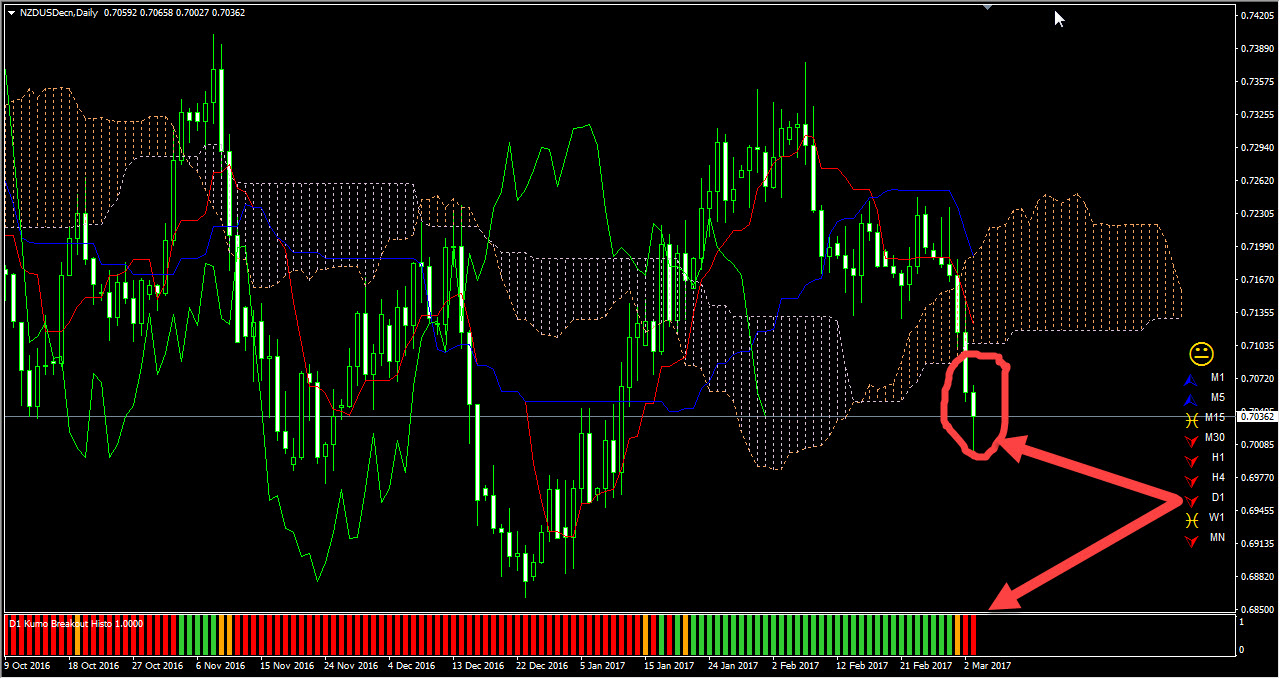 Thank you dear God bless you 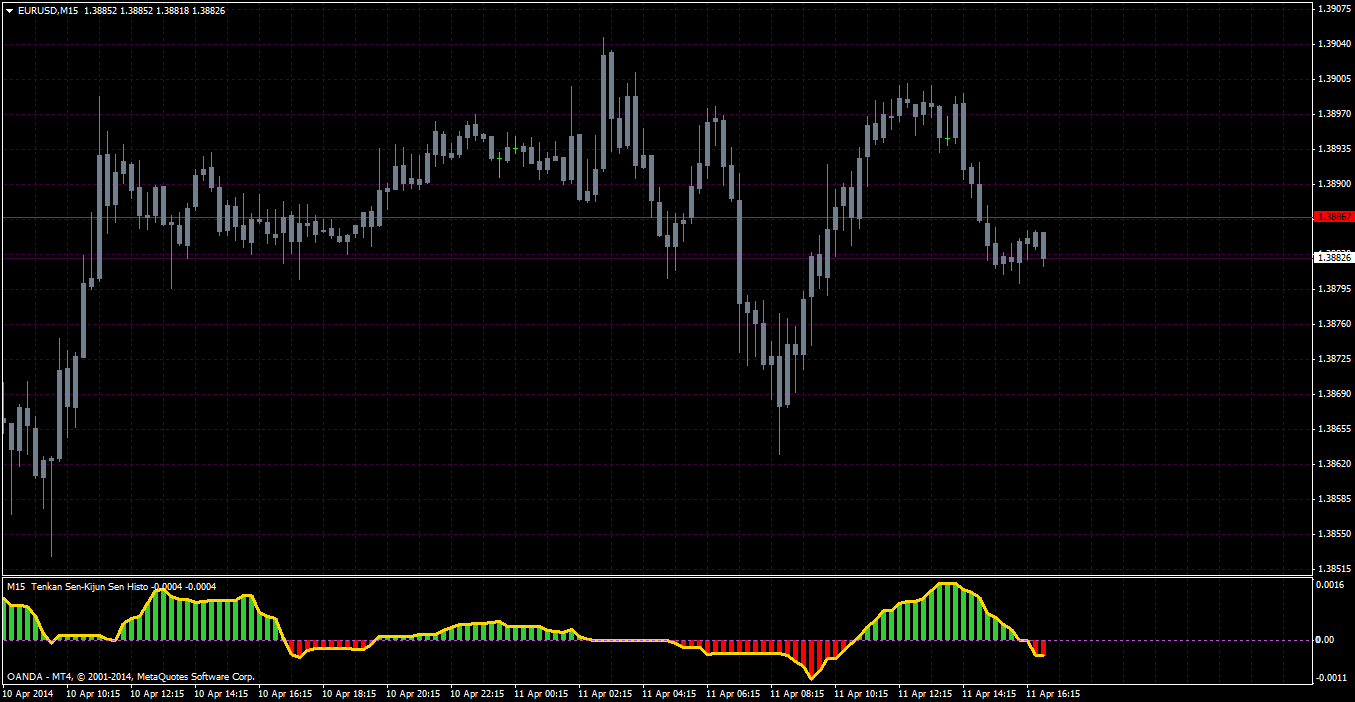 #7 by mrtools
This is a kijun sen histo which change color and alerts on trend change. 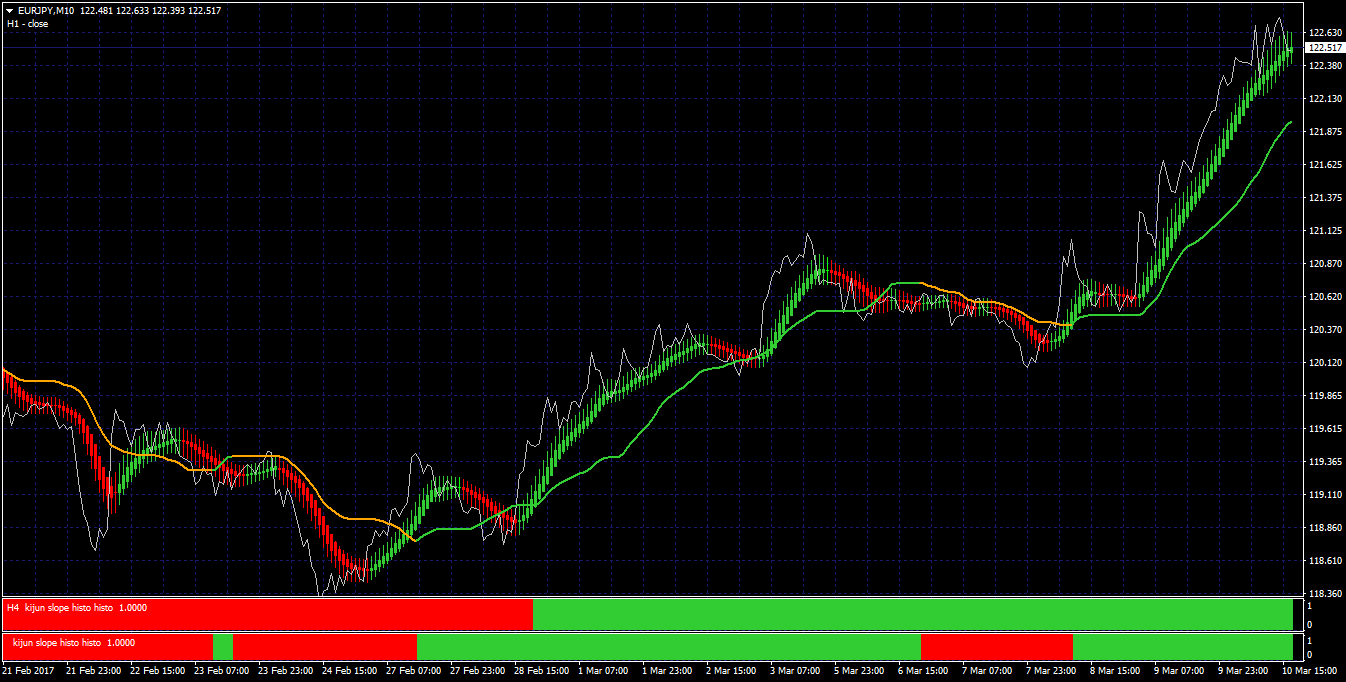 mrtools wrote:This is a kijun sen histo which change color and alerts on trend change. 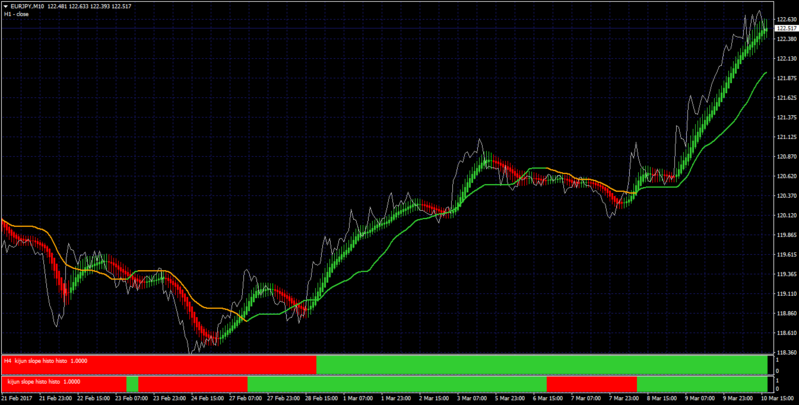 #9 by tradd
I'm looking for H4 Tenkansen/Kijunsen cross indicator in 5 minute period. tenkan_sen-kijun_sen_histo2_nmc.mq4 indicator with mtf could be nice.

Hi, Tradd will be able to add mtf later today,if no one gets to it before me.