What is a 'Candlestick' ?

A candlestick is a chart that displays the high, low, opening and closing prices of a security for a specific period. The wide part of the candlestick is called the "Real Body" and tells investors whether the closing price was higher or lower than the Opening price. Black/Red indicates that the stock Closed Lower and White/Green indicates that the stock Closed Higher.

The candlestick's shadows show the day's High and Low and how they compare to the Open and Close.
A candlestick's shape varies based on the relationship between the day's high, low, opening and closing Prices.
Candlesticks reflect the impact of investor sentiment on security prices and are used by technical analysts to determine when to enter and exit trades. 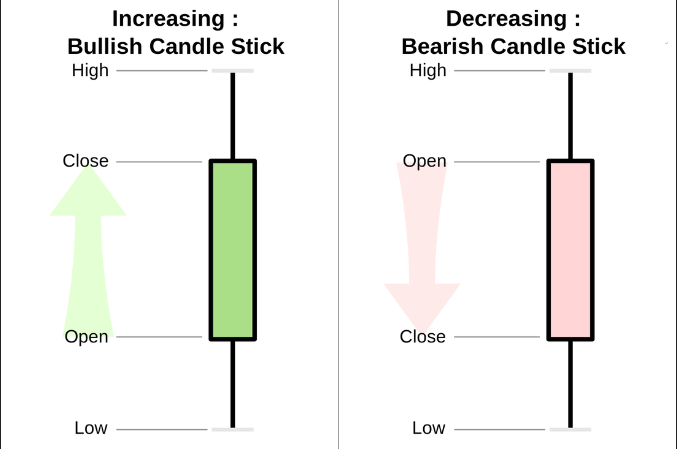 The Japanese began using technical analysis to trade rice in the 17th century.
While this early version of Technical Analysis [TA] was different from the US version initiated by Charles Dow around 1900, many of the guiding principles were very similar :

- The “what” (Price Action) is more important than the “why” (News, Earnings, and so on).
- All known information is reflected in the Price.
- Buyers and Sellers move Markets based on expectations and emotions (fear and greed).
- Markets fluctuate.
- The actual price may not reflect the underlying value.

According to Steve Nison, candlestick charting first appeared sometime after 1850. Much of the credit for candlestick development and charting goes to a legendary rice trader named Homma from the town of Sakata. It is likely that his original ideas were modified and refined over many years of trading eventually resulting in the system of Candlestick Charting that We use today.

In order to create a Candlestick chart, you must have a data set that contains Open, High, Low and Close values for each time period you want to display.
The hollow or filled portion of the candlestick is called “the body” (also referred to as “the real body”). The long thin lines above and below the body represent the high/low range and are called “shadows” (also referred to as “wicks” and “tails”).

What are 'Candlestick Patterns' ?