Really grateful for your words gentlemen and perhaps ladies. Well here we have it again - another day, another progression and another 50-60 pips of win thanks to the Multi-Infos steady guidance.

I’ll share with you where all this began most recently - the inception of the GBPUSD short - actually where it happened from and where I started taking the trades before developing this system.

Then I will show you exactly and precisely where we are right now.

The first two or three charts will show where this began and how it has been evolving.

You should see straight away that the simplest trade is now a break of the “inside formation” to the downside, through my aqua trendline on the mobile MT4 chart.

So if too scared to enter short now , where there is a 20 pips hole towards the break of the inside formation, marked by a red rectangle, an interesting trade is to wait for that break on say, the H1, then see if it retraces up to that line, and look for selling off it, eg on the M15, and a close again below it.

Now this all depends on the market’s interpretation of a “no deal” Brexit. But I have already mentioned downside targets, and it will take a lot to change the multi-info. That doesn’t rule out a change in sentiment. However, from what I can see, all indications - literally - seem to point towards this major swing break lower.

Time will soon tell, but I can’t see an alternative at the moment, and the multi-info is pretty adamant that the traders are short.

The evolution of the medium term trade

Where we are last couple of days.

Scenario 1 is straightforward short, or wait for the break lower and look for retrace on H1 and enter short as described above. We actually in an inside pattern of the blue box in purple box inside pattern. So we are in a fractal set of inside patterns or in other words a triangle has formed. These normally end moves but in this case it’s at the end of an XYZ complex correction by the look of it, and this is actually wave 2 end and the start of the big wave 3 idea down that got me starting this thread. Sell now with a tight stop at 1.2750 (yesterday NYC close + 2 pips).

Scenario 2 is another march uphill before more selling. This is how we’ve seen things play in recent days. The red box remains important. This is less likely according to multi-info, but reasonable given recent action. Sell at 1.2765-80 and 1.2800-15 this time.

Scenario 3, the market likes the no deal Brexit idea and punches up strongly, in which case for us, there is not trade because the multi-info doesn’t support this scenario. Momentum closes (big fast candles with close above) above the top red box that stop everyone who is short term short out would be this scenario. This will trigger a huge re-assessment of the market as well. And my focus will attend to DAX and Euro in this scenario.

In every case market has to show a clear and typical reversal pattern or candle at least on the M15 chart otherwise risk selling into a buyers momentum move then licking wounds.

I favour scenario 1 which is the straightforward continuation of the short in GBP.

Fridays for me are no trade days, so I will short tomorrow or even now, and leave Friday to be Friday most likely unless there is serious big momentum tomorrow, in which case I would sell a big retrace of tomorrow if tomorrow is indeed strong and short.

Finally, take a look at the short setup today on the M5. The 3 dojis that and failure to break new highs sealed it for me. Note the breakout of the aqua box as well. But the most interesting thing and this is true of most of the day is how the 8 simple moving average acted as perfect guidance - a close below stay short, a close above stay long. Great momentum indicator. I don’t use it, but a 9 or 13 EMA would probably act in the same way. 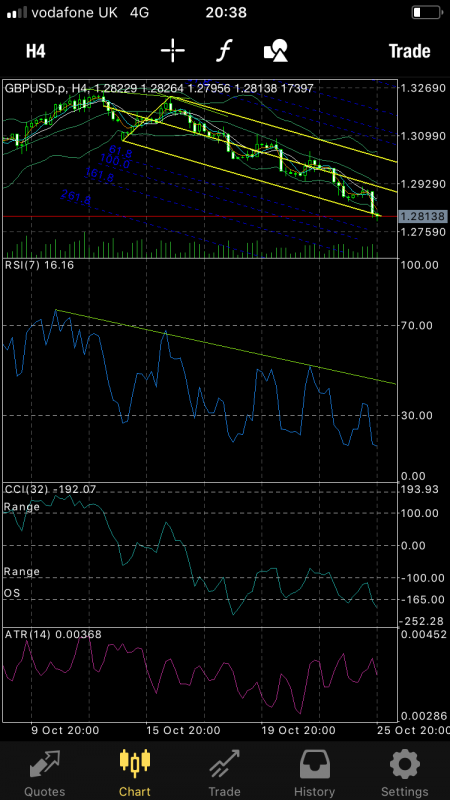